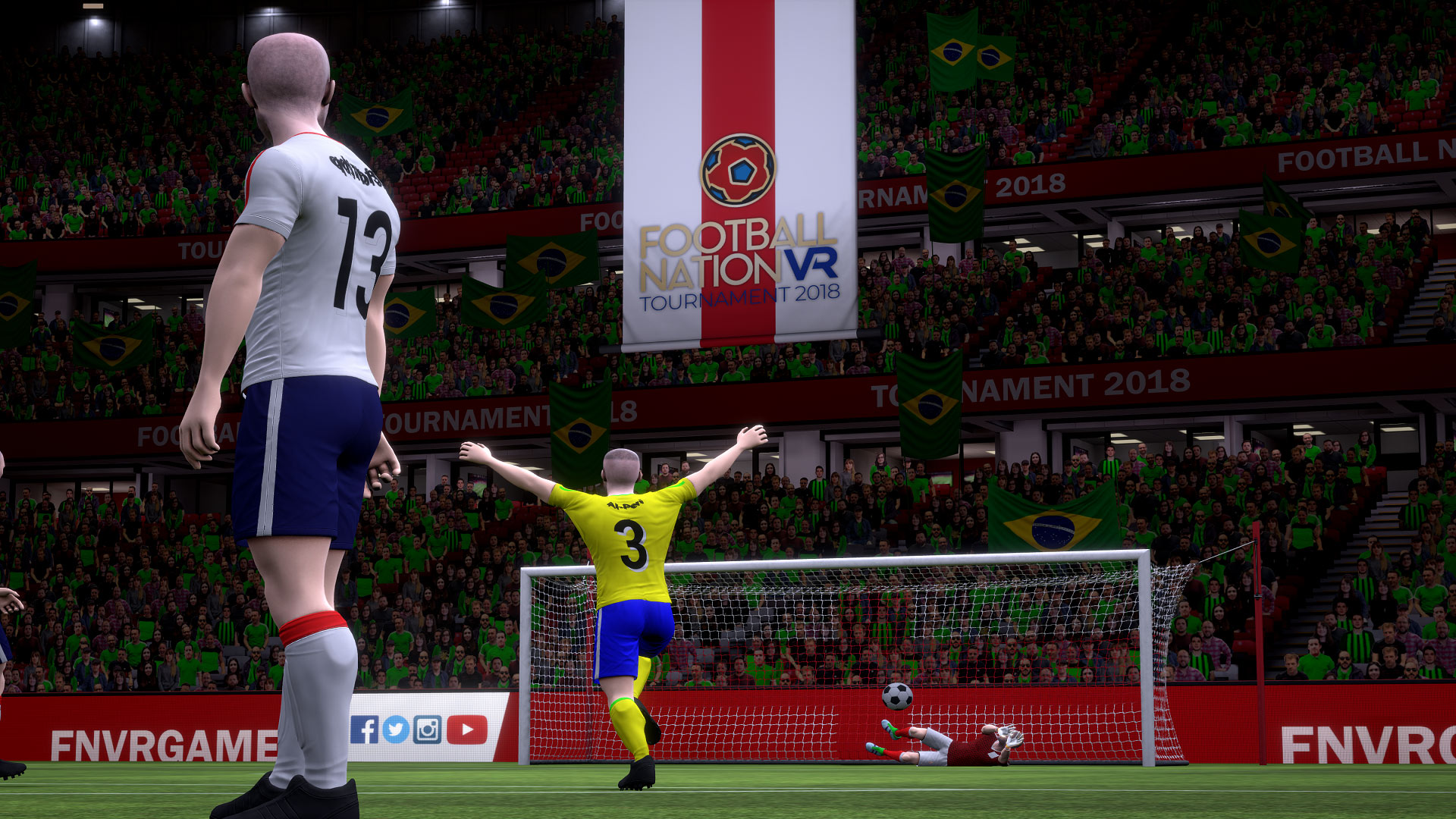 We’re excited to announce the launch of Football Nation VR™ 2018 (a free upgrade for VRFC owners) coming to PlayStation VR,  on June 7th 2018 and it will include a free tournament content update inspired by the World Cup. The World's First Virtual Reality football game now includes a load of super cool new content! For the first time ever, you can physically feel the rush of playing in the nation's biggest tournament as the vast stadium surrounds you; the virtual grass underfoot, the crowd cheering, the excitement and the undeniable patriotism for your country - a childhood dream come true.

From CherryPop Games, the developers of Sports Bar VR and VRFC, Football Nation™ is the birth child of a whole lot of community research, working closely with the PlayStation   VR community, to develop a VR Football experience to the game it is today and just in time for the World's biggest sporting event!   .

Working side by side with the community we’ve had heaps of awesome ideas to build what we had started, to take Football in VR one step further. As with any world first it is in itself a learning curve, and we didn’t shy away from it, we wholeheartedly embraced it, we believe in VR football. Rather than just release a series of little patches, we decided the answer was to rebuild what was there, break it down one request at a time; and in doing so we bring to you Football Nation VR™ with a whole host of new features (in no particular order):

New Stadiums to play in with a huge crowd ready to cheer you on. We had a lot of feedback that although the 5 aside football is great, it wasn’t enough, you wanted a bigger more premier league stadium to play in. Well you got it!

Penalties, should your game result in a draw, this was intentionally missed from our first Football VR title and was one of the top requested features and is a great addition to the game.

Professional Rules, we have implemented a automated version of throw ins and corners and half time. Providing a more realistic experience without interrupting play

Teams, inspired by the World Cup, Football Nations tournament 2018, allows you to play for your country and be in with a chance of winning the world's first VR Football tournament! Each win awards the winning team 3 points, the team with the highest score at the end of the tournament wins the Football Nation 2018 Tournament.

Solo play against the AI, by popular demand AI players now make up the numbers on the pitch, you can even take them on solo if you wish.     Eighteen Players on the pitch, and still running at 90fps, in an effort to provide a more realistic tournament experience, Football Nation will offer 16 players on the pitch, (18 including keepers) so a couple of your players went rogue and got a red card!

New Simple controls for an easier to pick up and play experience; with a lot of tweaking the and a huge learning curve to overcome from us we have fine tuned the controls to make a much easier to play experience, you no longer need to press a button to shoot, the main controls now are based around simple to pick up motions with the move controllers.       Including all new head facing controls; this was a popular request by the PSVR community and actually really aids in the pick up and play ability of the game.

Play together, Score incredible goals as a team, pass the ball and finish off heading into the back of the net. All-new passing controls give you more control over when the AI pass to you so you can plan your attack.

Celebrate the launch with football’s biggest tournament in VR on June 7th with the Football Nation’s™ 2018 Tournament content update. The free content update contains new game mode, play through the tournament with your favorite country, Football Nation VR 18 is the perfect way for every gamer to run on the pitch of the World’s most loved sport.

Choose from any of the 36 VR Nations and play through Football Nations unique tournament structure; in Round One you can play any of 36 teams but only 16 teams remain, over half the teams are eliminated and the competition continues until the final where just two teams are left and we have an ultimate winner.

Your Nation Needs you

Every win for your country adds 3 points to the Global leaderboards, the teams with the most points will go through to the next stage. Lead your team to glory, in Football Nation 2018, join your friends and play as your National team where each win counts.

Play solo against the AI or with friends in your chosen team, in an authentic stadium atmosphere all in Virtual Reality. This is your chance to join your team, and rewrite VR football history with your friends.

Teams will be a permanent fixture in the game giving players the ability to create, join and customise teams with their friends. It was such a great addition to the game that we couldn’t see it end once the tournament did so instead we expanded it further. Giving the players more flexibility to manage members and create their own teams.

See you on the pitch!